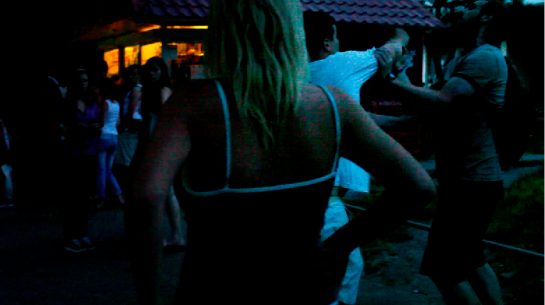 Man tries to hit Lance in the face while "wife" stands by.

The scene started by Lance and Joey stopped when a woman said help.

Pulled away the man takes the woman away as no one else helps.

Fireworks are going off for tourists right now around the large statue located in the heart of the city.  Life goes on and never stops to consider those caught in the middle. I came across a domestic violence case which could have been a trafficking victim case. A woman was being hit and asked for help. My two friends were in the center of it as I filmed from a far.  I tried not to escalate the scene with my filming. The man yelled “Paparazzi” and lowered his head and came at me. “What should I do, What should I do” I asked Lance as he came towards me. Dreams of punching an attacker in the face with my camera did not come to me at that moment I saw his eyes look at me the same way the man did on my last day in Uganda. The students in line for icecream made a path for the man right to me. “Dont fight him”. Lance said as calmly as I asked him. Lance was not fighting him, I was not going to fight him.  He grabbed me as I turned from a punch and he ripped my favorite shirt off (fortunately the buttons went and the fabric was ok) and had me in a half nelson type thing. Things seem long when you don’t know when or how they are going to end. He let go and got back to his woman after I did not pose a fight. He was like a drunk caged gorilla wanting to show his strength but confused to who to go after. He grabbed his woman and I kept following Lance. I was praying. Lance kept on trying to give the girl information about domestic violence and to see where go to for help. We thought she might have been trafficked because of her accent which sounded a bit spanish. My camera does not have a good auto focus system so i followed the best i could judging focus without looking the viewfinder. I held it around my waist to kill suspision. I still don’t know how to photograph these types of situations. But I need to know. We followed the man for a few minutes as he walked around trying to lose us. Eventually the woman wanted us to leave and asked us in english, “I live on the streets, i sleep, you and your friends, go, sleep. Go, sleep.” I think she was trying to get rid of us so he would not beat her more than he was going to. Lance kept pursuing the two of them following them around. I kept following. Then they stopped. the girl came to us and told us one more time to go. Lance told her more infomation on domestic violence then told her where to go to find us. She left and the guy came over to talk with us. Lance talked him out of his aggression and he eventually calmed down and shook my hand and said sorry for ripping my shirt, in ukrainian of coures. “Da”. I said. Then, “Drooga, drooga, drooga”. He was a bit startled it looked like when I said those words. I followed with those three words looking him the eyes shaking his hand firmly. Causes can’t be stopped, hearts can be changed though, and the love of Christ is so strong that it transcends all understanding. I can see now why Sergey never goes home. The tipping point of domestic violence. Pray for those two. His name is Andre.  yes. i am fine. I filmed the whole thing but it much of it is not in focus.

http://stephenmcgeefilms.com Please visit my website to view work from the past 10 years.

Photo Story of the Week